In-Just-US, US Inc., What is the real power of a court ‘judge’ (actually an Administrator)? & The Prison Bond Game.

What is the real power of a court ‘judge’?

Given what has been revealed about the foundations of Roman Law, what is the real hidden power of a judge when we face court? Is it their superior knowledge of process and procedure or of magic? Or is it something simpler and far more obvious?

It is unfortunate that much of the excitement about Estates and Executors has deliberately not revealed that an Estate, by definition, has to belong to a Trust––to be specific, a Testamentary Trust or CQV Trust. When we receive legal paper or have to appear in court, it is these same CQV Trusts which have our rights converted into the property contained within them. Instead of being the Trustee, or the Executor, or Administrator, we are merely the Beneficiary of each CQV Trust, granted only beneficial and equitable use of certain property, never legal title. So if the Roman Legal System assumes we are merely the beneficiary of these CQV Trusts, when we go to court, who represents the Trustee and Office of Executor?

We all know that all cases are based upon the judge’s discretion which often defies procedures, statutes, and maxims of law. Well, they are doing what any Trustee or Executor, administering a trust in the presence of the beneficiary, can do under Roman Law and all the statutes, maxims, and procedures are really for show because under the principles of Trust Law, as first formed by the Roman Cult, a Trustee has a wide latitude, including the ability to correct any procedural mistakes, by obtaining the implied or tacit consent of the beneficiary, to obviate any mistakes. The judge is the real and legal Name. The judge is the trust, itself. We are the mirror image to them––the ghost––the dead. It is high sorcery, trickery, and subterfuge that has remained “legal” for far too long. Spread the word.

In closing – the whole system is a fraud like the Insurgent UNITES STATES Inc. is a fraud! Where did you ever agree to be part of it are were you ever told what was going on! Fraud vitiates all contracts, agreements and even treaties!

The issuing of bond for profit on prisoners has finally been deciphered.
It is no wonder that there is a rise in prosecution for non-violent crimes!
As soon as your social security number hits the system, there is
someone buying a bond in your name that accrues the longer your ass
sits in jail. We couldn’t figure out why the incarceration rate was so high
that the counties couldn’t afford to pay the bill. 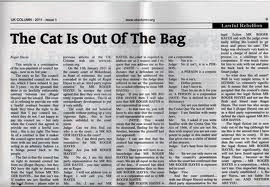 The courts are operating under Statute Law. A “Statute” is defined in
BLACK’S LAW DICTIONARY, FOURTH EDITION REVISED as a kind of
bond or obligation of record, being an abbreviation for “statute
merchant” or “statute staple.”

Statute –merchant = is defined as a security for a debt acknowledged
to be due, entered into before the chief magistrate of some trading
town, pursuant to the statute 13 Edward I. De Mercatoribus, by which
not only the body of the debtor might be imprisoned, and his goods
seized in satisfaction of the debt, but also his lands might be delivered
to the creditor till out of the rents and profits of them the debt be
satisfied.

The Grand Jury Foreman is the Drawer or Maker of the Indictment by
his signature, the Defendant/Debtor or Straw-man is the Drawee and
the State is the Payee and the live Man or Woman is the Payor. What
they are doing in the courtroom is all commercial, and is in conformity
to 27 CFR 72.11, where it says all Crimes are commercial. What the
judge and prosecutor are doing in the courtroom is making a
commercial presentment under section 3-501 (1) “Unless excused
(section 3-511) presentment is necessary to charge secondary parties as follows”:

(a) Presentment for acceptance is necessary to charge the drawer and
endorsers of a draft where the draft so provides, or is payable
elsewhere than at the residence or place of business of the drawee, or
its date of payment depends upon such presentment. The holder may
at his option present for acceptance any other draft payable at a stated
date;

(b) presentment for payment is necessary to charge any endorser;

If you don’t accept the charge or presentment you are in dishonor for
no acceptance under 3-505 of the U.C.C. (c) and 3-501 (2) (a), (b).
Acceptance is the drawer’s signed engagement to honor the draft as
presented. It must be written on the draft, and may consist of his
signature alone. It becomes operative when completed by delivery or
notification 3-410 of the U.C.C.

You are the Fiduciary Trustee of the Straw-man which is a cesti que
UNITED STATES TRUST; in this capacity you have the responsibility to
discharge all his debts, by operation of law. You are also the principal
or asset holder on the private side of the accounting ledger; you are
holding the Exemption necessary to discharge the debt. When they
monetize debt they have to have a principal, capital and interest is what
circulates as principal and is called revenue or re-venue. Principal is
where venue lies. When you are in dishonor they cannot use your
exemption to pass the debt or charge through your account to obtain a
discharge, so they sell your dishonor, which has a commercial value of $1,000,000 dollars for each count.

When Social Security # is assigned or
a Blank Bond is issued and when you are imprisoned the Bond is filled
out. This Bond is called a Bid Bond, Standard Form 24 (REV. 10-98)
prescribed by GSA-FAR (48 CFR) § 53.228(a). This is also called a Prison
Bond. These are also referred to as Contract Surety Bonds. The First, the
Bid Bond, provides financial assurance that the bid has been submitted
in good faith and that the contractor intends to enter into the contract
at the price bid and provide the required performance and payment
bonds. The Second, the Performance Bond, protects the obligee from
financial loss should the contractor fail to perform the contract in
accordance with the terms and conditions of the contract documents.
The Third kind of Contract Bond is the Payment Bond which guarantees
that the contractor will pay certain subcontractor, labor and material
bills associated with the project.

On April 9, 2002 (12:18 pm) Lehman Brothers Banking Cartel in New
York City agreed to provide prison industry leader CCA (Corrections
Corporation of America) with a new $ 695.0 million senior secured
credit facility, to be combined with a $150 million notes offering. The
war on terrorism has created a buzz in the private prison industry. Less
than three weeks after September 11th, a New York Post story on the
for-profit private prison industry stated, “America’s new wall of
homeland security is creating a big demand for cells to hold suspects
and illegal aliens who might be rounded up.” In order to prosper, prison
operators need to maintain a steady flow of prisoners and prison
dollars.

The Corrections Corporation of America owns most of your prison
systems and sells its stock and shares on the New York Stock Exchange,
the major stock holder is the Paine Webber Group.There is also a Prison Realty Trust [PZN], which is a real estate investment trust [REIT] and is the world’s largest private sector owner and developer.

Prisons are nothing but warehouses for the storage of goods and
chattel under commercial law. The Warden is a Bailee or Warehouseman
[before the term Admiral was used he was called Custos Maris “Warden
of the Sea”] [In some ancient records He was called Capitanus
Maritimarum or “Captain or Tenant in Chief of the Maritime”] who
receives personal property from another as Bailment. The Bailer is one
who provides bail as a surety for a criminal defendant’s release.
When your dishonor is sold within the United States it has a six digit
accounting # and is called a Cardinal Number, when it is sold at the
International Level it goes Ordinance or Military and uses a nine digit
accounting number. This is where AutoTRIS and CUSIP come in.
AutoTRIS is the Automated Forensic Traces Investigation System and
was designed in the Russian Federal Center of Forensic Science using a
graphical toolkit that was developed at Automation Designs &
Solutions, Inc. for other software products.

Why is privatizing prisons so appealing to Federal, State, and Local
governments? As the Nation put it: The selling point was simple: Private
companies could build and run prisons cheaper that the governments.
Unfettered American Capitalism would produce a better fetter, saving
cash-strapped states millions of dollars each year” while simultaneously
generating huge profits. The Nation explains this miracle would be
accomplished. “Private prisons receive a guaranteed [per diem] fee for
each prisoner, regardless of the actual costs. Each dime they don’t
spend on food or medical care [for prisoners] or on wages and training
for the guards is a dime they can pocket.” Most guards in public prisons
belong to the LEOU, which is part of the American Federation of State, County, and Municipal Employees AFSCME.

I have a pointed question for you, why aren’t we as principals on the Private side of the
accounting cycle using our Exemption Priority to discharge all this
Public Debt under the Uniform Exemption Act section 3 “Exempt”
means protected, and “exemption” means protection, from subjection to
a judicial lien, process, or proceeding to collect a debt. The answer is
we are all double-minded and do not know who we are in a
commercial setting. Every individual in Prison is in there, because of
Commercial Dishonor.